Kaelos speaks with Shiftstoned about her unconventional approach to deck-building on the heels of a first-place finish in an ECL weekly event. Science, community and the healing power of games are just a few of the topics that emerge from our conversation about Power bases in Eternal.

Read the full article at:
https://www.shiftstoned.com/articles/UnusualSuspects.html

camat0 sits down with Shiftstoned to discuss the Power bases behind all four of his winning lists from the Eternal Community League’s inaugural Sunday Challenge event. We talk Power, Crests, fixing and the merits of Privilege of Rank.

Read the full article at:
https://www.shiftstoned.com/articles/quad.html

Back in May, I blogged about reaching Shadow level 100 after some friends and fellow Eternal players were asking me what the rewards were.

More recently I also reached Level 100 in Time and kind of forgot about it until someone mentioned it again. They wanted to know if I was the first to reach Level 100 in any faction.

I honestly don’t know the answer to that question, but I’m not aware of anyone else who has documented it.

At any rate, if you are wondering what the current rewards are for reaching Level 90 and up in Faction Progress, read on:

As with Shadow Level 100, reaching Time Level 100 will earn you…an Omens of the Past pack.

I’ve heard a rumor that some enhanced rewards for Level 100 Faction Progress are in the works (possibly a Totem, or Totem upgrade?) so I’m looking forward to seeing whatever those may be.

Meanwhile, the reward for Level 90 was actually more interesting: a Marisen deck image.

Speaking of Marisen, I was intrigued to read about her appearance at the throne room duel between Eilyn and Kaleb that was documented in the latest chapter of Eternal lore.

Some had speculated that Kaleb killed Marisen after their confrontation at the Praxis Aracnum during the Empty Throne campaign. That never seemed quite right to me, so I was glad to see those rumors put to rest.

Now, about those Fire, Justice and Primal levels…still have some ground to cover there.

Over half the cards in a recent tournament-winning Combrei deck piloted by Mouche are Power sources. With help from the the Eternal Power Calculator, this article  attempts to answer the question: “When is too much Power just enough?”

This article takes a look at their power bases using the Eternal Power Calculator.

Let’s take a look at the power base using the Eternal Power Calculator:

The Eternal Power Calculator is a fan-built deck-building tool that visualizes your odds of drawing enough Influenceand Power based specifically on the cards found in your deck.

Import a deck or build one from scratch: the visualizer will create a custom chart on the fly which you can then edit and export. 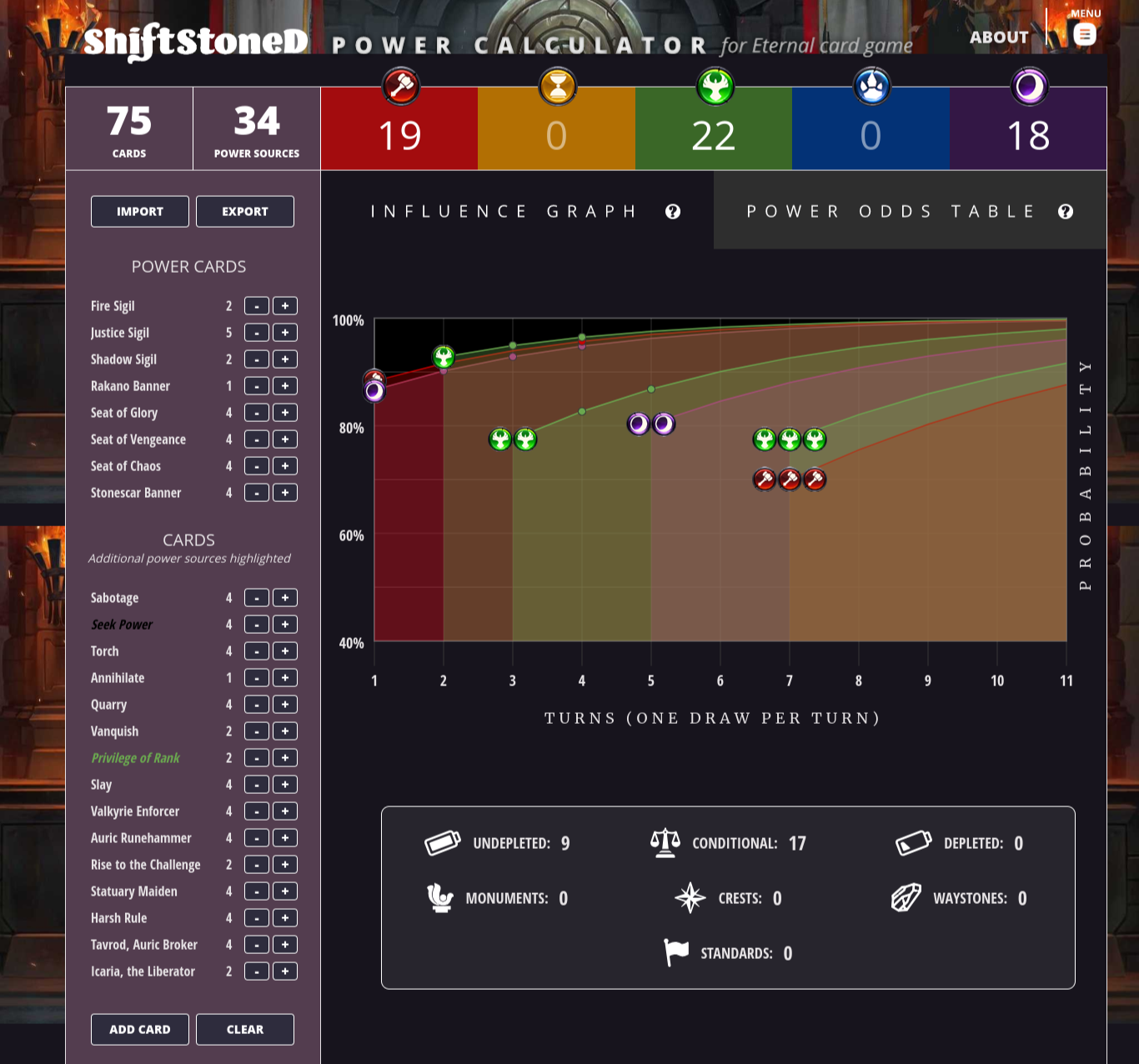 You will gain a competitive edge in Eternal by maximizing the chances of playing your cards on curve.

Getting under the hood and optimizing your deck’s power base is the best way to ensure that you can play the cards you want, when you want to play them.

The Eternal Power Calculator helps you to do just that.

Try it for yourself, and help us continue to develop by sending your thoughts.

Browse competitive events and content release schedules – or add your own – on this a fan-built community calendar for Eternal.

I’ve spoken to a lot of people who say they want to participate in competitive Eternal events or tune in to Eternal-related streams and casts – but either they aren’t aware of them, or just plumb forget when they are happening.

The Eternal community calendar is an attempt to address this. You can export events to your personal calendar to ensure you will never miss a deck registration deadline or your favorite podcast again.

Or spread the word about your own Eternal-related event or content release by submitting a new calendar entry.

To market, to market

When I read about the Fall of Argenport’s new Market mechanic, my first reaction was “Wow, this is so unexpected. And so…awesome!”

My second reaction was, “Oh no…Markets are going to be a stand-in for actual sideboard support in Eternal, aren’t they?”

Since then a few days have passed, and both reactions have held up.

For starters, I applaud Dire Wolf Digital for investing the extra work in designing and implementing a powerful new mechanic that is sure to shake things up in Eternal.

Like manyplayers, I am already having fun just imagining the deck-building possibilities that Markets will open up. The implications for hand manipulation, tutoring and power correction make this design even more appealing.

On top of everything else, Markets will be a great introduction to situational deck-building for those players who may have never used a sideboard before.

Selecting a secondary set of cards to be used in particular match-ups can take some getting used to. Markets are an imaginative way for novices to gently grow accustomed to this approach in a Best of One setting.

At the same time, I can’t ignore this feeling of apprehension that the introduction of Markets means we will never see full support for sideboards in Eternal.

Side-boarding permits an extra layer of strategic depth in card games that is just not attainable otherwise. We know that Eternal will be getting Organized Play (with cash prizes!). And that some of these competitive events will use a Best of 3 format.

We also know that Markets will be the “intended stand-in for sideboarding” in Organized Play, as revealed on discord.

Ultimately it would be a disappointment if formal support for this aspect of deck-building in Eternal ends up being restricted to a maximum of 5 cards, and only to decks that include Merchants (or any future cards with Market interaction).

While the introduction of the Market feature has exceeded my expectations for new card mechanics in Set 4, I sincerely hope it does not shut the door on full support for sideboarding and a persistent Best of 3 mode in the future. It existed in Eternal’s beta stage, so we know it is doable.

Meanwhile, you can get your Best of 3 fix by participating in one of the many events hosted by third party tournament organizers such as: RNG,The Great Parliament or Kaelari. There is even a 24/7 Best of 3 matching queue on Kaelari’s ladder.

Check out Shiftstoned.com for a calendar of events.

The Merchants of Menace

As a lore-lover, I am excited to see that each of the Merchants appears to be a flavorful personality who expands our understanding of Myrian geography. What more will we learn about these exotic settings when The Fall of Argenport releases?

This is not the first time we’ve seen vaulted desert architecture in Eternal. But knowing that it exists in a location which is likely called Auralia just deepens the sense of place.

As you might expect, the merchant for Time offers us a selection of mysterious magical objects.

A crystal ball for sale, naturally. Some thirst-quenching potions. A mortar and pestle for conveniently grinding Shiftstone in the comfort of your own kitchen.

And most impressively,  a sick backscratcher that appears to have been made from someone’s actual hand.

I drive through a town named Winchester on my way to work. But in my imagination, Winchest is a suburb of Argenport that borders Rakano.

It is a stop between Crownwatch territory and that somewhat seditious settlement known as the “forge for the throne”.

It is also where gearheads go to shop – both loyalists and rebels.

They eye each other nervously over the racks of merchandise, wary of a violent outbreak. Or worse – a personal embarrassment,  such as dropping a tool.

In stalls like the one pictured here they haggle with vendors over swords, shields and even drones.

If they know how to  ask the right questions, they might get to see the back room where this Tinker merchant keeps the Big Green Thing.

While his garb suggests a geographic proximity to Auralia, the merchant of Jennev appears to be on the go.

Myria’s many Explorers have demonstrated that the pursuit of  knowledge will not be impeded by great distances. This is even more true of the pursuit of profit.

Jennev Merchant’s caravan might be found anywhere along the expansive route between Amara and Skycrag.

His wares reflect the diverse locations visited along the way. A worn shield. Some shadowy potions. Destran pottery. A discarded helmet.

He will gladly trade you any of these items for that Oni beard ornament you recently came across.

Speaking of beards, Shadow’s Merchant really knows how to rock a soul patch.

I bet my dude is from Stonescar originally. But currently he makes his living on the street corners of Kerrendon.

Whether Kerrendon is a district in Argenport or a different metropolis altogether is a tantalizing question to ponder.

Although he looks a lot like a Gunslinger,
K-Merc has learned that enemies can be dispensed just as effectively with poisons as with bullets — if not more so.

He wants to share some of his toxins with with you…for a price. He’ll even throw in a few sticks of incense at no extra charge, to help keep the authorities off the scent.

Most of the time, Kerrendon Merchant is able to avoid Cabal extortionists who want a piece of the action by just packing up and moving to the next block.

When that doesn’t work though, he gets on their good side by hooking them up with unauthorized bootleg recordings of Diogo Miloga’s upcoming studio album.

I find Ixtun Merchant a lot more intimidating than the others.

Something about the way she is holding that rifle makes me wonder if she is going to sell it to me or shoot me with it.

Of course, a lady can’t be too careful in Ixtun. Which I’m going to guess is somewhere on the  border of Stonescar mining territory.

The “gently used” Grenadin for sale are a tip-off. Save some gold by adding your own Shiftstone, and you can activate them on the cheap.

Miners are a rough lot. To say nothing of the  bandits and slavers who inhabit the region.

So I guess I don’t blame her for being cautious. Just be sure to keep your hands where the lady can see them, and I bet you’ll get a fair deal.

Now this I can work with

The meta shifted a lot during Chapter 18, so this deck went through a number of iterations. This is the version I finished the month with, peaking at Rank 16.