Thanks for the opportunity @PodcastEj – it was a blast talking @EternalCardGame with you and your co-hosts! Looking forward to the next *Eternal Journey* podcast. https://t.co/jXxU8mY1GT

🥶 Top 32 in the Expedition Winter Championship Finals a new personal best for me in @EternalCardGame. Thanks to all the competitors and supporters – looking forward to next quarter! pic.twitter.com/dLgFW7RCSe

It was gratifying to take first-place in Tuesday Night Eternal’s November Expedition Challenge with my own version of Stonescar Mastery.

But it is even more gratifying to know that community-driven Eternal Card Game competitions are alive and kicking thanks to this new series. Keep up the good work, lads!

You can catch all the action on demand at Telemokos’ Twitch channel, including this replay of the entire event.

Someday I will finish first-place in one of GreatParliament‘s business-like, coat & and tie tournaments. For now I am satisfied to have won the janktastic Casual Friday event for the third time.

This week featured the Direwood home team in Keebler Feln: 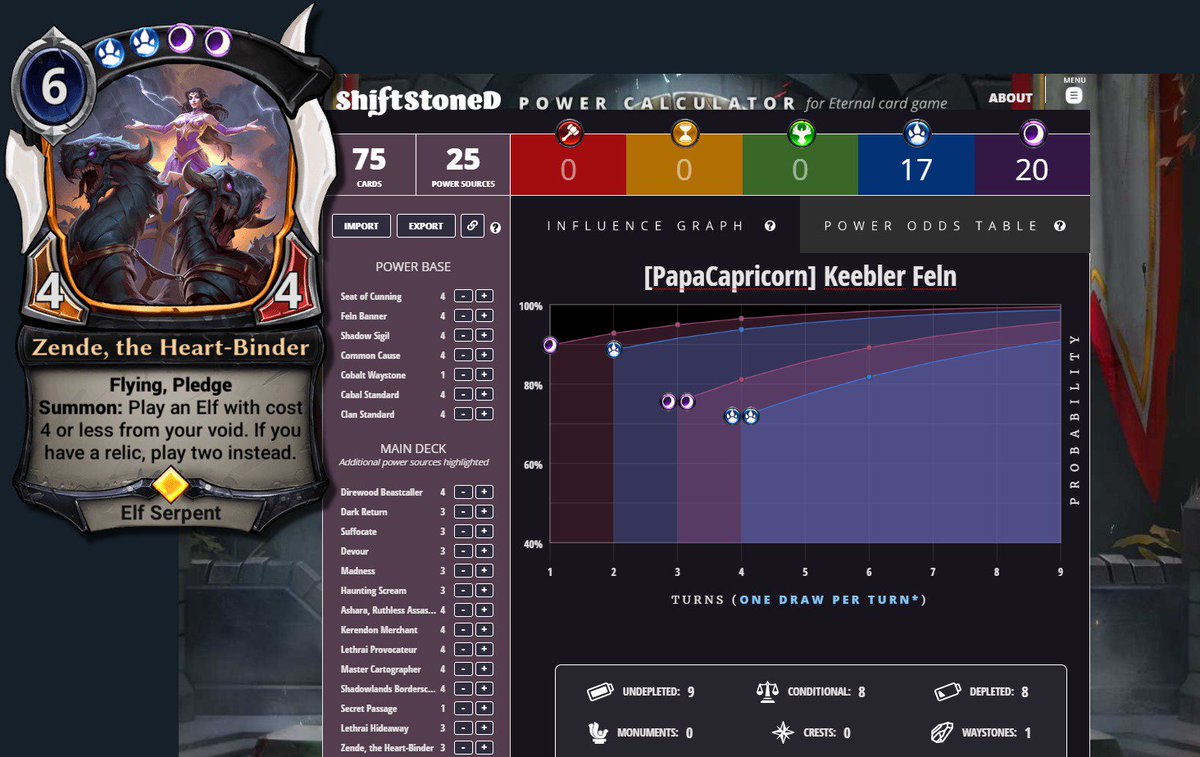 December 14, 2018 – Congratulations to all of the Eternal Card Game players who qualified for RNGEternal’s Eternal Tournament Series 2018 World Championship — especially to Tobboo of the Eternal Titans for their first place finish, following a trail blazed by teammate camat0 who was last year’s ETS World Champion.

To commemorate the conclusion of the 2018 ETS series, we have assembled here a gallery of Power base visualizations for each of the Championship decks, from Skycrag to Chalice.

November 14, 2018 – Eternal brewers can now share or store Power base visualizations generated by the fan-built Eternal Power Calculator at Shiftstoned by creating a unique link for their decklist. You can use this feature to facilitate collaborative deckbuilding, or maintain a personal archive of different builds and works in progress.

END_OF_DOCUMENT_TOKEN_TO_BE_REPLACED

‪
Grimfan couldn’t decide what was more important in last week’s Eternal Tournament Series competition: Streaming? Or winning?
So he did both: topping the first-ever community qualifying event for the Eternal World Championship 2019, and doing it all on camera.
In this interview, the Eternal Titan chats with Shiftstoned about his past, present and future in Eternal Card Game:
https://www.shiftstoned.com/articles/StreamsComeTrue.html

Thanks to MantidMan of TeamRankstar for the campfire invitation. It was a blast chatting with one of EternalCardGame’s most dedicated enthusiasts. And the Rankstar s’mores are top-notch….Read the full interview at TeamRankstar.com

Team Seek Power Gaming is poised to capture several top spots in both the Eternal Tournament Series and the Eternal Community League.

In this first part of a series, we talk to SPG members SooNo, BruisedByGod and SecondBlue about what it means to be a team player in Eternal, A Strategy Card Game.

Read the full article at:
https://www.shiftstoned.com/articles/Seekers1.html