Wow. Starting things off with a bang. There is a lot to like about this one. Evergreens. A badass Elf. Explosions. Too many belts.

I’m really curious to find out how this scene fits in to the overall story arch of Set 4.

Following on from the events of Dead Reckoning, do the Elves of the Direwood strike back in revenge against Argenport? Or is this possibly a flashback, giving us some background on a younger Ashara?

Who or what was in that wagon that was so important? And have Lethrai clothiers made some major advancements, or does this lady just shop elsewhere?

Since there seems to be as much emphasis on the action as the character herself, I’m guessing this card will be a Spell rather than a Unit. It is not a big leap to assume we are in Fire here, but the presence of an Elf suggests it may be dual-faction.

A Stonescar ability that deals damage and also disrupts your opponent’s hand? Forced discard definitely seems to fit with the theme of fiery sabotage depicted here.

Most of all though, I love the swagger. Casually tossing a torch over her shoulder. Grinning subversively. Eyes aglow with a sense of satisfaction that can only come from completing a dangerous mission. Let’s hope the rest of Set 4 has this much personality.

Speaking of personality, here is another mysterious lady on a mission. This one moving in shadow – and only Shadow by the look of it.

When this image was revealed on discord, there was some indication that it may depict an Umbren. I was skeptical at first, but if you look closely there is indeed a strong resemblance to a certain Coaxer, right down to the facial markings around their eyes.

If she is in fact an Umbren, she is clearly different from the others somehow. The hooded robes and urban setting distinguish her from any of the other Radiants we have seen so far. My hunch is that she is in disguise, attempting to pass for human in order to pull off some covert scheme.

Those shadowy spheres attached to her belt could be a clue: Are they explosives of some kind? Poisonous gas?

Is she in cahoots with the Elven pyrotechnician that we met earlier? Are Lethrai and Xenan conspirators engaged in a campaign of guerrilla warfare directed at the Throne?

This seems more like a portrait to me, so I’m guessing the card is a Unit. The air of intrigue and stealthiness makes me hope she is Unblockable. Would Deadly and Unblockable be asking for too much?

At this point though, it doesn’t even matter. The atmosphere is so thick that the only thing I really want to know is….how long before I can add this card to my deck?

This piece of artwork reveals something truly unique, an enchanted item never before seen in the world of Eternal.

The Yeti seer’s enthusiasm lets us know that this shiny object he is exhibiting must be quite remarkable. Certainly it will leave a lasting impression on anyone who may be exposed to it.

Is it a magical phenomenon of some kind? A gift from the Yeti gods? Is it made of crystalline ice? Is it…a very special snowflake?

Its hard to tell if this card will be an ability or a Unit, but I’m leaning towards Unit. I want to say it is something related to Power gain, but that seems unlikely given the assumption that this is almost certainly a mono Primal card.

I guess we do already have Yeti Explorers and Explorer Yeti. A Yeti Shaman with some Time influence and a Power gain ability might not be that out of the question (note the yellow necklace).

Then again it could just be a particularly sharp and shiny rock for packing in to one of those deadly Snowballs.

One of these things is not like the other…

That Set 4 would include some Dinosaurs is not a big surprise. Owls would also be a pretty safe bet. But Dinosaurs and Owls on the same card? Living together?! This could lead to mass hysteria.

It is cute that Dino here apparently thinks he is an Owl. He’s just chilling with the rest of the parliament, unaware that he is more than twice the height of the others – or that his scales are not feathers. His avian companions do not seem so convinced, but they are either too polite or to afraid to mention it.

If I had to go out on a limb (see what I did there?), my guess would be that this is a Hooru Spell which has something to do with changing a Unit from one type into another.

Turning Dinosaurs into Birds would certainly be appropriate in terms of evolutionary science. Maybe the text could read: Choose a Unit, and your other Units become the same type?

I’ve been hoping to see more cards like Common Cause that reward players for having multiples from a particular tribe. This is obviously useful for supported groups such as Dinosaurs, Gunslingers and Yetis.

But it could also really be fun to enable deckbuilding strategies that work for Eternal’s more neglected tribes, like Rogues or Elementals.

Maybe it is wishful thinking, but I feel I am just one or two new cards short of perfecting my Combrei Engine tribal deck. 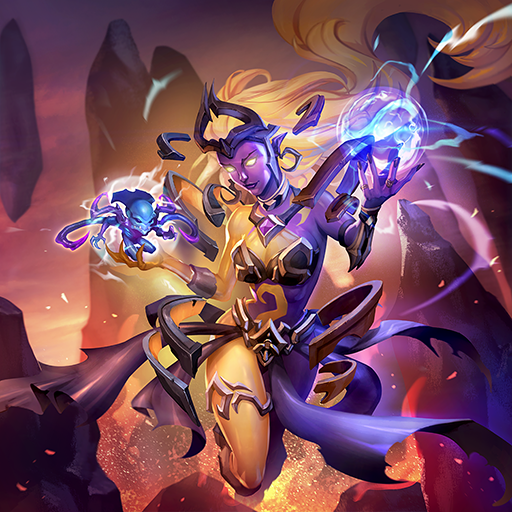 So what exactly is going on here? There is a lot on which to speculate. Further evidence that there is some kind of strong connection between Wisps and Radiants, for one thing.

Mitotic Wisp looks like a baby version of the dual-faction Radiants, including the one we see here. The swirl of light and darkness on their torsos is nearly identical.

Which makes you wonder: Does the smaller species evolve into the larger one, in a way similar to the life stages of the Yeti-Jotun? (Google tells me that mitotic relates to cell growth…Eternal make you smaht!).

Some have gone as far as to wonder if what we may be seeing here is an evolved Talir, who has been exposed to enough Waystones that she has transcended humanity entirely and become a Radiant herself. Seems like a stretch to me, but there is a certain similarity.

In any case, it has been a while since Xenan last received a truly impactful card.

Cruciation appears very occasionally in full-on Lifeforce decks, and even then your other options for removal are probably better. Agile Deathjaw does not even see play in dedicated nightfall Dinosaur lists. Duskwalker is given a rating of premium playable in draft but has yet to find a home in any serious constructed deck. Mitotic Wisp is…interesting, but needs a lot of support if it is ever going to be anything more than a meme.

Let’s hope this new Radiant reverses the trend. We know that Set 4 will include the Crest of Mystery to help you hit those Time and Shadow influence requirements.

I don’t want to get my hopes up, but I’m really looking forward to seeing a stronger Xenan identity in the months to come. Too often I feel that the most successful Xenan lists are basically Ayan plus the same playable Time and Shadow cards which appear in other factions.

Beautiful Radiant lady, there is a lot depending on you…please don’t let us down! 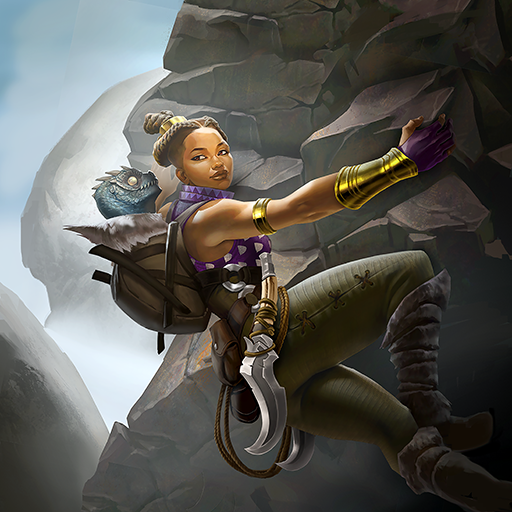 Very likely an Explorer of some kind. Probably mono Primal but possibly Elysian. She appears to be….

Dawwwww! Look at that little guy in the back pack! So cute! Seems sort of familiar too.

Though something about the climber’s expression makes you wonder if her reptile companion has perhaps been a bit too chatty during their ascension of this cliff.

“Are we there yet?” Almost…

If I had to wager, I’d say that this scene is somehow related to a hatchery. And that the little serpent doing the Yoda impression is a young Cloudsnake.

Generally Cloudsnakes fly though, so this one either hasn’t reached maturity yet or is…injured perhaps?

What else could this be, other than a conservationist Explorer airlifting a wounded sky serpent to Skycrag Veterinary Hospital? Perhaps this card does for Cloudsnakes what Ground Crew does for Valkyries.

If that is not it, then I’m stumped. I’d love to hear what you think…please share your ideas in the comments section below. 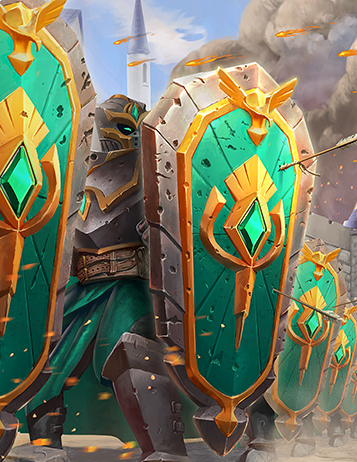 Here we have a bunch of dudes with shields standing ground near what appears to be the Spire District of Argenport. At least one of the dudes looks a lot like Civic Peacekeeper.

I’m going to hazard a guess that this is some kind of defensive ability in Justice. A speculative risk, I know.

Either way, these dudes have an important job to do. Because Myria’s capital city gets besieged a lot.

Ooh – another Wisp sighting, this one looking a lot more like one of  the Tormentor’s  Spitelings.

Terrifying and kind of adorable at the same time. At first glance, this card appears to be mono-Shadow. But closer inspection reveals golden frills and foreground floaters, suggesting it could be Xenan.

I doubt we will see any more Nightfall cards in Set 4, but if we do the starry background would make this one a good candidate.

Meanwhile, the lush and woodsy setting is not something we have seen a lot of in Eternal so far. It could indicate that Wisps and their companion Radiants will be expanding their range throughout Myria in Set 4 — possibly with the objective of liberating the Tormentor?

This guy seems ready to pounce from the treetops and claw your face off, which makes me think Ambush. An Ambush unit that also has a Spiteling’s Entomb ability could be quite useful against relic weapons, something that Xenan decks sometimes struggle with.

Whatever the ability, I’m excited for more Wisp-Radiant synergy. I hope that this card –along with the Radiant(s) that we met earlier — will empower some viable tribal strategies for Time-Shadow decks.

Otherwise, I may never make it out of Bronze III with my Mitotic Worldjoiner deck. b