Where is the Justice?

I have a lot of (mostly harmless) questions to ask about this card.

That Elf in the foreground is the one being stunned, right? And I assume the woman standing behind him is the one doing the stunning?

Did the lady take offense to some question that was presented to her? Or was she the one doing the asking, and then not pleased with the answer she received? Am I missing something obvious?

At first I thought the shape above the dude’s head was an exhalation, as if he was blowing out a smoke galleon. But at full-size it becomes clear that this is the lady’s hand, and she is using it to magically extract some life essence from between his lips.

I get how that might prevent you from attacking or blocking until the start of your next turn (at least). But I still don’t understand how this is related to asking a question – harmless or otherwise.

To be clear, I’m not complaining – I think the artwork is fantastically evocative. We’ve already met several individuals with lots of personality in Set 4, and this illustration is no exception. I’m just really curious about what is going on here.

This Elf looks unlike any other we’ve seen, although his ears give him away. His ornate pauldrons might be something worn by a member of the Crownwatch, and that would kind of make sense with this card being in Justice. Except…why blue? Is he some kind of Feln ambassador?

And the spellcaster has no pupils, which is a common Valkyrie trait (again Justice) – but the similarities end there. Does she have any allegiances, or is she just acting Rogue-like? Because that’s not very Justice-y either…

Beyond that, perhaps the most important question is: Why does this card exist?

Is it simply to reinforce the trend that being Green means you get cards that are like other cards, but your cards are just plain better than those?

Speaking of cards that are just plain better than others…if being in Justice gives you a discount of 2 power, adding Warp to a spell apparently costs 4 now?

Stock prices just went up for hyper-aggro decks that can’t get enough Cinder Yeti. And also for units with Endurance.

The artwork is clearly a pre-cognitive portrait of me (minus the horns and beard) after being beaten down by umpteen Grenadin and/or Yeti decks in a row. I expect to see this card most often around Diamond I when I’m at 99/100. Oeh!

Huzzah! I thought that the artwork announcing A New Chapter seemed unfamiliar at the time. Looks like we actually received our first Set 4 spoiler back in March without even noticing it.

Appropriately, the standard bearer for Primal is a Clan soldier. Presumably she is marching on Argenport during the events of Chapter 17.

At this point we can only speculate about what a Clan Tactic does. But something to do with selective draw and discard seems like a safe bet.

I can’t help but wonder who the other standard bearers will be.

Being associated with the most organized military force in Myria, it seems obvious that Justice would choose a Valkyrie or a Paladin to carry the Crownwatch Standard. Does this mean it would Transmute into a Crownwatch Tactic? Or something different altogether?

Rakano already has an Oni flag-bearer, but you may have forgotten about him since he sees so little play. Still it would be fitting if a Rebel Standard in Red would be borne by an Oni. Gunslingers and Grenadin are presumably less concerned with battlefield symbolism, although a Centaur might not be out of the question.

While I know what Standard Time is, what would a Time Standard look like? My sense is that Radiants and Wisps are too otherworldly to bother with heraldry. And as far as we know, Dinosaurs and Sentinels are illiterate .

So…should we expect an Arcanum Standard borne by a Mage? Or perhaps an Amaran Standard,  proudly held aloft by an Explorer?

Maybe a Copperhall Standard, carried by a Minotaur? I dunno…that would seem to be rooted more in Combrei rather than mono-time. I’m stumped here folks. Please help me out in comments section.

Purple is even more difficult to pin down. The whole nature of Shadow is about doing things undercover, rather than marching into battle waving a flag like “Hey, look at me!”

A Cabal Standard would be relevant color-wise, but again – you don’t really want to advertise the fact that you are a member of an secretive crime syndicate.

So my vote is for something completely unexpected. Let’s bring a forgotten tribe back into focus. Prepare for the Sporefolk Standard,which is borne by a mushroom-person, and Transmutes into Sporefolk Tactic: “Discard the top 5 cards of your deck and be happy for Grasping at Shadows.”

Can you hear me now?

I bet there are a lot of statues in Argenport. They inspire little dudes (like the dress-up soldier depicted here) to grow up and join the ranks. (BTW, is that Argenport Solider being memorialized?)

Here a young citizen is imagining the foes he will vanquish and the spoils he will gain.

For some reason though when I look at this card, I imagine the broken things my opponent is going to do with it rather than the other way around. Probably because the top cards of my deck are never the ones that I need.

I play one of the ‘Rods (Divining Rod or Tavrod) – or any of the other cards with a “draw/play or discard” mechanic – and it might as well read “Discard the top 5 cards of your deck.” (Hey – Sporefolk Tactic!)

But inevitably my opponents will play Icaria, Kaleb and Heart of the Vault all from one rodded Alluring Ember. Or draw an 8/1 Inquisitor’s Blade with Destiny to play on Tavrod immediately. I don’t have reason to believe that Answer the Call will be any different. My opponents calls will be answered, but I’m sure to have a dropped connection.

I am definitely not looking forward to getting hit in the face by all those Flying, Charging, Deadly Tavrods with Double Damage, Warcry and Lifesteal. But you can look forward to watching me pay 6 just to discard the top 6 cards of my deck. Cue the Mindfire face emoji.

I like the idea of putting Curiox together one piece at a time, Frankenstein-style. Play his Eye, then draw his Claw to deal 3 damage to the enemy unit of your choice. If it is a favorable trade, maybe the Claw will stick around for a while to do even more damage. Deliciously gruesome.

The absence of a rarity gem indicates that this card is a token – so it is hard to evaluate without the full context. But why let that stop us from engaging in wild speculation?

How about a payoff for assembling a complete Curiox? Play two Eyes, two Claws, a Tail, and a Torso…win the game? It seems unlikely that Eternal will feature an Exodia effect anytime soon, but one can dream.

A safer bet though would probably be that this is shuffled into your deck somehow from another card. The Dusk Road period did see a smattering of Fate cards, so probably Claw is generated by one of those.

Wherrrre issss it? Can anyone who has played Clank offer some additional suggestions in the comments below?

Bring that beat back 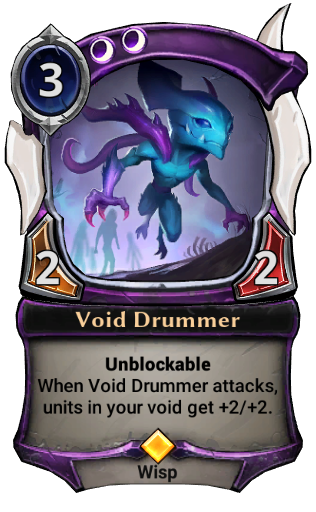 Wow…actually does look a lot like the drummer for the Void, my short-lived post-college doom metal project.

Our third Wisp out of the cards and illustrations spoiled so far. I’ve been wanting to find out more about these little guys – as well as their Radiant companions – and it is looking like Set 4 will not disappoint.

The notion of another mid-cost Legendary that works in Xenan has got my toes tapping. Giving it some Void synergy makes this even more my kind of card.

I’m trying to curb my enthusiasm though, so as to avoid disappointment when someone inevitably proclaims: “Dies to Torch…therefore unplayable.”

Without the Unblockable keyword this card would have a lot less potential. But when you consider that any deck playing Drummer is likely to include more than one copy – along with recursion effects – a 4+/4+ Unblockable for 3 suddenly becomes a lot more interesting.

This is before we even mention Dawnwalker or Ephemeral Wisp. Plus any new Void-love or Wisp-Radiant synergy that Set 4 may bring.

I mean, once we see Void Guitarist, Void Vocalist and Void Bass Player things will really heat up. Throw the goat and crank it! 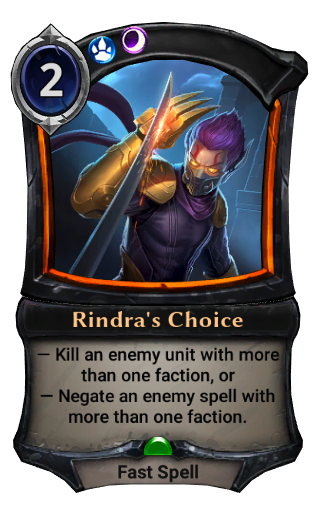 Huh…looks like Cirso’s Choice may be more than a rumor after all. Apparently multi-faction modal cards are no longer just the purview of Eternal’s Scions.

Perhaps this cycle is where the recently dubbed Heroes of Myria will begin to flex their muscles. If the rest are as interesting as Rindra’s Choice, we have a lot to to get excited about.

An inverted Annihilate and bizarro Kaleb’s Choice rolled into one? This card has Playable written all over it. Just about every Feln deck on the midrange-to-control continuum will want to include this.

Of course I can’t help but wonder who the other Deciders will be. If we have Cirso in Elysian that leaves…who?

We won’t know for sure until the remaining Choices are revealed of course. In the meantime I’ve decided it is fun to imagine the possibilities. And I’m really interested to hear your thoughts in the comments section.